This week, the whole world’s atwitter about Gilmore Girls coming to Netflix in October. I’m looking forward to some quality time in Stars Hollow, too, but there are several weekends to fill between now and and then. Me? I want to fill my Saturday nights with all the British mysteries. Some of these are BBC and some are Netflix originals, but all are full of great accents, dry humor and lots of…murder. [Insert evil laugh here.]

Agatha Christie’s Poirot: For me, this is the gold standard British murder mystery. David Suchet is an adorable penguin of a Poirot whose third person references show just how smart he thinks he is. Then, he’ll solve an unsolvable murder and prove he’s right to think so highly of himself. 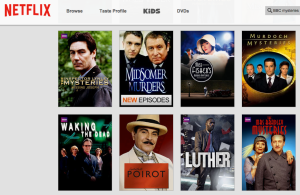 So many mysteries, so little time.

Inspector Lewis: I’m a recent fan of this show, which is a continuation of the Inspector Morse series. I really like the dynamic between freshman and senior detective, especially when you get into the personal life of the younger Sergeant Hathaway. These are hearty shows, too, with 90 minutes of exciting twists.

The Fall: This is a great little Netflix Original series starring Gillian Anderson (X-Files!) and Jamie Dornan (yes, Mr. Grey). Dornan is a bad, bad man (not a spoiler – you learn that pretty quickly), and you’ll likely feel conflicted about your attraction to him. Join the club. Also, there’s one season so far, and it ends on a cliffhanger. Come on, Netflix!

Luther: Idris Elba is a commanding, conflicted detective, who works a little more on the fringes than those listed above. He’s more volatile than Poirot, for sure. I really love this series not only for Elba, but for the fantastic Alice Morgan (played by Ruth Wilson). She’s otherworldly and unsettling and they make a weird, wonderful “team.”

The Bletchley Circle: I love it when ladies join the detective game. This group of women – former code crackers – works outside of the law to solve crimes. For all the male detectives I feature on this list, this series really shows off the intellect of this secret society of friends. #girlpower

Sherlock: You’ve probably already watched this. If you haven’t, there’s probably nothing I can say to convince you to do so.

That should keep us busy, eh? Pip pip cheerio and happy watching!

With pumpkin season upon us once again, the days are growing shorter and darker, which means that lazy show bingeing is now more socially acceptable (for those socially conscience among us). Not that I’ve ever let this stop me. Peer pressure is for the weak, my friends.

That said, to aid in your antisocial activities:

I have a feeling that this is going to be a great season.

The laziest of Sundays to you, readers.

by Lindsey (and Kelsey in video form)

We’ve finally made it, everyone. It’s Friday, and we’re all a little better for it. Whew.

To cap off this busy week, we’re giving you permission (or whatever) to watch another episode of old favorite with us: Are You Afraid of the Dark? Sometimes. Anyway, due to the popular demand of two readers, we’ve turned our usual read along format into an audio visual dream come true. Well, it’s a dream come true if you dream of watching us from unflattering angles yap to each other. We’re not judging your dream, so please have mercy on our first attempt at YouTube humor. Enjoy?

Are You Afraid of the Dark? – “The Tale of the Quiet Librarian”

P.S. If you don’t actually watch along, this video is probably a huge waste of your time. Don’t say we didn’t warn you.

– by Kelsey and Lindsey

So, it’s Friday night, and you want to watch something new whilst reading sarcastic comments from your friendly, neighborhood bloggers? Oh man, you guys. This Watch With Us (WWU) post is dedicated to one of our very favorite shows from childhood: Are You Afraid of the Dark? (AYAOTD). By favorite, I mean a show we tried to watch to prove to ourselves that we weren’t tiny baby scaredy cats. (Yay cats!)

This episode is on Amazon Prime, because we’re (un)professional instant video watchers and subscribe to everything. If you want to watch along, join us after the jump! (Yes, we realize these posts might not be that fun if you aren’t watching along, but they’re really fun for us. Sorry. Sort of.)

END_OF_DOCUMENT_TOKEN_TO_BE_REPLACED

By Kelsey and Lindsey

Welcome to the inaugural post in our Watch With Us series! We’re trying a kind of Mystery Science Theater 3000 premise in written form. Basically, this is going to be a series smack-talking through shows/movies.

We’re starting with Goosebumps, because why not? Get your Netflix account fired up, press play and read along with our banter, if you’re so inclined. END_OF_DOCUMENT_TOKEN_TO_BE_REPLACED

When consuming media, I try to pursue a balance in my subject matter. For example, I’ve been reading lots of true crime and murder mystery books lately (I’m nice, I swear), which has led me in search of lighter fare from my Netflix queue. Enter the perfect complement to my scary reading habits: the teen drama. 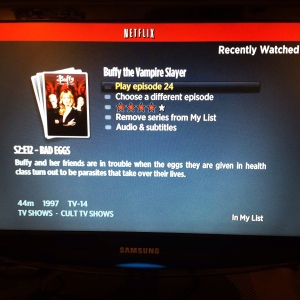 I find this genre appealing because the high school settings provide a kind of weird nostalgia, while offering that tasty drama that is better viewed than experienced (says the formerly nerdy teen/now happy-to-be-boring adult). I was born in 1986, so I managed to miss some of the quintessential teen dramas of the early 1990s. If you’re interested in playing catch up with me, here are my top picks playing on Netflix now.

Dawson’s Creek: I recently watched Dawson and friends for the first time. Much cheese. So sexy. Very crying. Wow. (I enjoyed it immensely.)

Buffy the Vampire Slayer: I’m currently on season two. It’s snappy, fun and it feeds my feminist side. Plus, it gets extra points for adding real monsters to the high school experience.

Gossip Girl: Basically, I watch it for the clothes. No other reason is necessary. Right? Right.

The Wonder Years: This show was a favorite of mine during the Nick at Nite heyday. I plan to start back through with fresh eyes soon.

Next in my queue are Roswell and Freaks and Geeks, because I like aliens and critically acclaimed dramas cut down in their prime.

Oh, you don’t like any of the above teen dramas? 1. Who are you? 2. Here are some July 1 additions to Netflix that might tickle your fancy. I recommend 12 Angry Men and Mean Girls played back-to-back, because I’m all for equal opportunity ugliness from the sexes.